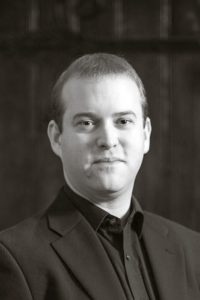 Martin Ford is the Organist & Director of Music at The Guards’ Chapel, Birdcage Walk. His wide-ranging freelance career encompasses work as an organist, piano accompanist, choral director and teacher. Martin read Music at Oxford University, graduating with a first-class degree, before continuing his studies on the Master’s programme at the Royal College of Music. He has held organ scholarships at Southwark Cathedral and Magdalen College, Oxford, the positions of Assistant Organist at St Martin-in-the-Fields and Westminster Abbey, and Sub-Organist of Christ Church Cathedral, Oxford. He has given recitals in St Paul’s Cathedral and the church of Saint-Sulpice in Paris and accompanied numerous broadcasts on BBC radio and television. Highlights include the 60th anniversary of the coronation at Westminster Abbey, attended by Her Majesty the Queen and broadcast live on television, and accompanying the Abbey choir in the BBC documentary Music and Monarchy. His discography includes Christmas music with the Vasari Singers, and two discs with the Choir of Magdalen College, Oxford.

We are sorry to inform you that all events arranged for our Spring and Summer...

Trinity Boys Choir@TrinityBoysChoiJul 30 We've been rehearsing during July and enjoying singing lots of new music. Today there were…

Trinity Boys Choir@TrinityBoysChoiJul 23 RT @JessCarrollActs: Very sad to learn that Jay Benedict won't be shown in the In…